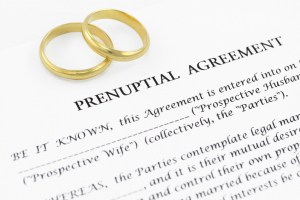 Prenuptial agreements have a bad reputation, because many people think that signing one means you plan on getting divorced. When a couple is confident they want to be with each other forever and they both decide to take “the plunge” the last thing on their minds is the possibility their marriage may end in divorce. But talking about prenups doesn’t have to be a buzz kill for the euphoria about marriage. Many people who are now divorced were at one point blissfully in love, too. Given that more than half of first marriages end in divorce, smart couples will not use the excuse that talking about a prenup means that one party does not trust the other, or that one party thinks that the other is after their money.

Prenups can be relationship savers

If you think about the fact that disputes about money is one of the leading issues that cause couples to head for divorce court, then you can see how having candid conversations about money before you tie the knot can create a more honest relationship. When both parties can sit down and open up about their finances, what assets they have, what kind of debt they are dealing with, and what their goals are for the future, it can relieve a tremendous amount of pressure around wondering where you stand. Going into the marriage, each spouse has a clear picture of each other’s finances which will allow them to create a plan for their future together.

Protect your children from a previous relationship

If one or both of you is bringing children from a previous relationship to the marriage, you can make provisions for their future with a prenuptial agreement. They guarantee that your children’s futures will not be in jeopardy if your life plan changes in the future, or in the event of the death of you or your spouse.

Prenups must be fair

A prenuptial agreement is simply a contract between the two spouses, therefore it is governed by contract laws. A prenup must be entered into by mutual consent; it must be a written document that makes a full and fair disclosure of both parties’ assets. It must be fair and conscionable to both parties and filed with the Chancery Court.

The best part of creating a prenuptial agreement is that it is written and filed before the wedding while each party is still in love with the other and still wants nothing but the best for the other. If the relationship should come to an untimely end, and they become sworn enemies, their original agreement will help make the property division process go more smoothly. If one party should pass away before the other, the prenup along with the estate plan will help clarify how that spouses wanted their assets to be distributed.

Prenuptial agreements have had an unfortunate reputation. When you work with a knowledgeable and experienced Mississippi divorce lawyer, you will see just how practical they can be. We invite you to contact Taylor Jones Taylor to learn more about our family law services.